A Simplified Map of Espoo

Espoo, Finland’s second biggest city, might be a confusing place for someone who doesn’t know it. It for example doesn’t have a real center and it is strongly divided into two parts. A map doesn’t mean much to someone who just glances it – you don’t know which places are important, where the bus routes go, where the main crossing places and services are etc.

So I basically removed almost everything from the map and left a few of the biggest places there. Anybody can then navigate in Espoo since then they can be explained where smaller places are in relation to these main “villages” or landmarks. 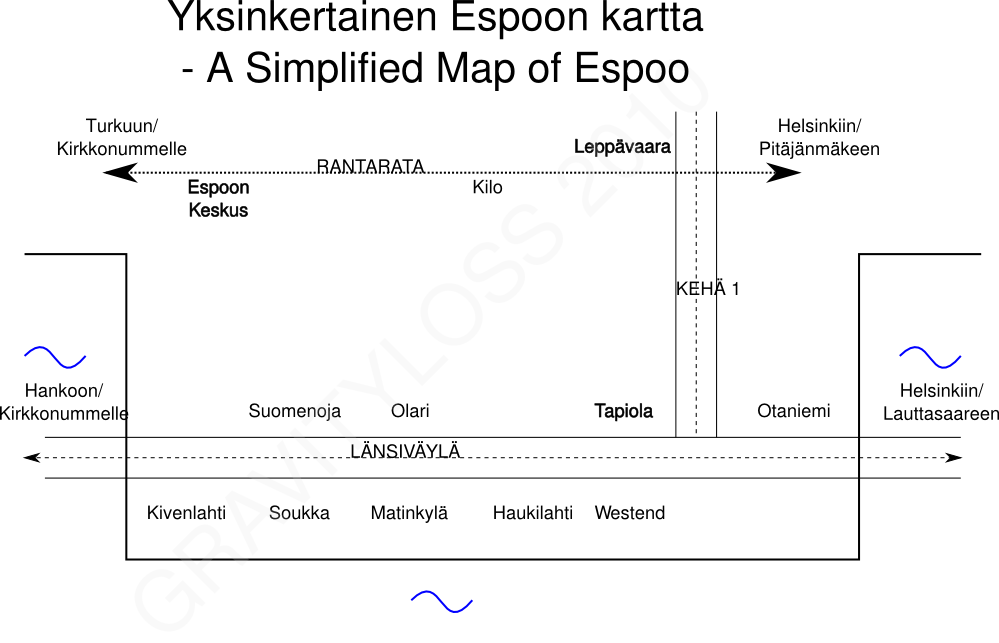 Espoo sits on the southern coast of Finland, right next to Helsinki, on its west side. It is a wide peninsula, so there’s water on both sides that make most of Espoo’s east and west border. There’s only sea to the south of Espoo.

Most of the north side areas are near the Rantarata railroad that goes across Espoo in the east-west direction, the biggest centers being Leppävaara and Espoon Keskus.

On the south side, the areas are alongisde the Länsiväylä freeway. Tapiola is the most important.

The south and north are connected mainly by Kehä 1, the nearest ring way of the Helsinki-Espoo-Vantaa capital area. It goes near both Leppävaara and Tapiola as you can see from the map, so that makes them important crossing points.

There are other roads and freeways and minor centers but this is a very rough overview that one could perhaps even remember and should cover maybe 70% of the population of Espoo. There’s much more stuff to the north that is completely left out too since it’s mostly somewhat sparsely populated. Let me know if this was of any use to you. 🙂