The next fifteen years.

Pure Electric – will be marginal

Battery energy density will probably be lousy and they will be expensive so that pure electric cars can’t fill that many needs in the next fifteen years. What kind of vehicles will we see instead?

If most people live 20 km from their workplace, it only takes perhaps 5 kWh to move that distance in a current era car. At a conservative 100 Wh/kg, the battery only becomes 50 kg and it’s cost could be reasonable. The vehicle can and practically must still have a petrol or diesel engine for any longer trips, but this relatively small battery should cover most of the driven miles during the year. The system would be a series hybrid – the engine is only attached to a generator and all traction is through the electric motors. This mostly works at a reasonable cost for small vehicles. The engine could be a 500 cc two cylinder machine to reduce surface area vs volume and thus losses, since smooth output isn’t needed here. With opposed cylinders there would be little vibration. It would also sound funky.

Cruiser – the lean lossless one

This is for long trips on the highway, where batteries do you no good at all. Instead there’s a good diesel engine and good gearing with very little losses in the powertrain. The vehicle doesn’t need to be that light (so you can have good sound proofing for example), but good aerodynamics is important. These long trips are done often with more people and stuff onboard, so these vehicles tend to be larger because of that too.

Hybrid hybrid – a compromise between the two above

And this is where actually the largest volume of vehicles fits in, since people want to have options. Any technology could win here: hydraulic hybrids to make cruiser tech city compatible, parallel electric hybrid cruisers for mixed driving, series electric hybrid commuters with larger battery packs and / or bigger engines…

What do we have now?

The Cruiser we already have today in most European manufacturers’ Diesel cars. The Hybrid Hybrid is something that Toyota Prius and Honda Insight approach from the Cruiser end of the spectrum with the parallel hybrid system. Chevy Volt / Opel Ampera tries to approach from the Pure electric car end. The Commuter frugal hybrid, *nobody is making*. Why? That would seem like the clearly most obvious choice. One obvious reason for the lack of frugal hybrids is that there are other costs than just the battery. Even if you saved money with a smaller battery, you would still have to provide the electric motors and power electronics and charging system that all would be almost as big as in a car with a larger battery. The charger can be smaller since the smaller battery loads up quick enough even with a smaller current and/or voltage, and the vehicle would also be lighter meaning smaller electric motors and a smaller hydrocarbon engine.

There are a couple of ideas that I’ve gotten from reading a Finnish report on electric vehicles, made by experts for the parliament. One is using the power inverter of the car in reverse as a charger. So, simplified, the cord coming from the wall plug would be connected to the electric motor AC side of the power electronics, not the DC battery side. The power electronics has to be able to run in reverse anyway during regenerative braking. This could enable loading quite quickly, if the motor voltage was the same as the wall outlet. The European continental norm (all household outlets) 230 V AC single phase sine wave is easily changed to 350-400 V smooth sine wave with a single phase step up transformer. 16 amps is the biggest ordinary fuse so we’re only talking about the power of a 3 kilowatts with one fuse (if I got it right). This would roughly mean three hours of charging for one hour of driving. The three phase 400 V AC that every house also has, for the electric stove at least, is changed easily to 600-700 V for the battery by the car’s inverter and vice versa. Think if you could hook 400 V from the wall straight to the car with no converter whatsoever. 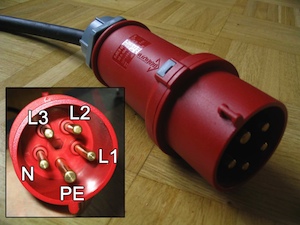 16 amps would mean 6 kilowatts, or 1.5 hours of charging for 1 hour of driving. 32 amps and 45 minutes. This would also mean that it would be really easy to move energy from the battery to the network. It’s no secret that such inverters closely resemble ordinary industrial three phase 400 V inverters, which happen to be manufactured in Finland, at least by ABB and Vacon. If the battery voltage wasn’t 350-400 V or 600-700 V, more complex transformers would be needed that would yield more losses, cause harmonics to the grid and where reversing would be harder.

So all in all this would suggest strong campaigning for 350-400 V or 600-700 V battery voltages in continental Europe. I’m sure all kinds of companies have their ideas of selling their expensive proprietary charger technologies, but proper choices made early enough could remove most of the charger problem out of the equation altogether!

6 Responses to Three kinds of hybrids