Why precool but not liquify – Skylon and SABRE

Well, I thought maybe I could add some content. Everybody’s heard about the British Hotol follower Skylon and its airbreathing SABRE engines.
What’s special about them? My understandin’s based on this excellent document from Reaction Engines explaining why the system is what it is.

Well, they are air breathing engines that run on hydrogen. They precool the intake air with hydrogen and have an intake air compressor like a jet engine so they can start from a standstill. 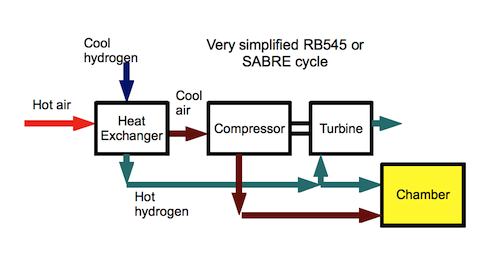 They are not ramjets (and definitely no scramjets since the flow is subsonic) since they have a compressor and thus also have better compression ratios and efficiencies, meaning less airflow needed for the same thrust.

They are not that far from air turborockets, but they do a neat trick, and they are very close to LACE – liquid air combustion engines – except that they don’t liquify the air.

SABRE is conceptually based on the planned Rolls Royce RB-545 powerplant of the Hotol – an aborted British spaceplane of the eighties. The RB545 was to use hydrogen to precool the air before compressing it with a compressor. Then some of the now hot hydrogen was used to drive a turbine (that would drive the compressor and the hydrogen pump) and exhausted while some of it was fed into the main combustion chamber together with the high pressure air.

This concept was quite close to a LACE engine where the incoming air is cooled all the way until it liquifies. Then it requires very little pumping effort (pump size and power is related to volume flow, not mass flow). You can also separate the oxygen and nitrogen in this way.

On the other hand it resembles a turbojet since it has a compressor, or an expander air turborocket (but there the cooling is not used beneficially).

The problem with these kind of engines is that they require an excess of hydrogen for the cooling. Now, RB545 and SABRE are less extreme than LACE engines – they only cool the air and don’t liquify it.

In LACE, only a small part of the hot hydrogen coming from the intake heat exchanger is used for work, for compression of oxygen and hydrogen. They are liquids anyway and require little effort to pump. So a lot of hydrogen needs to be carried but most of it is then left unused after it’s been used to liquify the intake air.

On the other hand, in a turbojet or air turborocket, the air (especially at high speed and altitude) is warm, fluffy and requires a huge heavy and draggy compressor to compress and that requires a lot of power too.

It turns out that a good middle ground can be reached where the supplies and the needs meet. Only cool the incoming air enough that you can extract the compression effort needed for it from the hot hydrogen you just heated with the air. This is the whole idea of RB545 and SABRE.

Now, you still need slightly more hydrogen for this than you’d really want. Rocket engines run in the 5.5x to 6x LOX-heavy category (and they’re still rich, because OH would be 1 hydrogen to 16 oxygen masses and H2O 8:1). RB545 was designed to go with a 10x air mass compared to hydrogen mass. At a 20% oxygen concentration, that’s only 2x oxygen mass. SABRE is designed to be at 12.5x air or 2.5x oxygen.

The cooled air is nice since now the compressor can be smaller than in a jet with a similar mass flow. Also it can be made of low temperature materials. The inlet can be much much simpler and lighter as it doesn’t need to do so much compression as in a hot engine. This is important as inlets usually dwarf engine masses in large Mach range airbreather designs.

SABRE doesn’t really use hydrogen in the precooler and doesn’t exhaust excess, instead it has a secondary Brayton cycle helium loop. Apparently this is beneficial for turbine/compressor matching and avoiding hydrogen embrittlement. The rocket chamber also needs cooling and this is planned to be done with liquid oxygen. There are of course hydrogen, LOX and helium pumps, a hydrogen preburner and a few heat exchangers and many other things left out of the simplified diagram.

What does it mean?

I’m still undecided with Skylon. A SABRE related engine might make for a good first stage airbreather anyway. I don’t know if it would be of any use to run any similarly concepted engine with methane.

6 Responses to Why precool but not liquify – Skylon and SABRE