It doesn’t have the same sound as “The Last V-8” now does it? When you look at what’s happening in the world of automobiles, you get some idea of a change. It is always slow, yet I predict that when it happens, probably starting before the end of this year, people are taken by surprise.

Why Would Anyone Buy A Hybrid Car?

It doesn’t have that much better fuel economy than a modern petrol or diesel engine if you drive out of the city, and it costs some more and is complicated. New turbocharged and variable valve engines can do pretty well because they can be built to opearate in a flexible manner. BMW has even introduced a technique that could be called a “virtual hybrid” – where the aircon compressor and battery charger are disconnected when the gas pedal is pushed to the bottom, resulting in extra power available for traction – allowing a smaller engine to achieve the same acceleration.

In some cases, like buses that need to stop often, hybrids make great sense, but otherwise I see the improvements in ordinary direct internal combustion engine driven cars narrowing the gap quite considerably. On the highway the hybrid has no advantage. 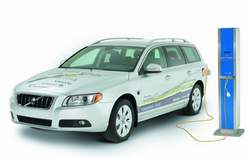 So, add a grid recharge capability and you have a plugin hybrid. By itself that’s not much yet though, you have to enlarge the batteries too. Since most trips for most people are commuting and errands, they’re short and can be done entirely on battery power. You also still haul the gasoline engine along and it is used on longer trips. Most problems solved right here? Sounds easy.

Chevy Volt / Opel Ampera is coming soon. And just take a look at the huge number of plugin hybrids being developed, listed at Plugin America. Most of these will be dead ends, but some might make it big.

The problem is, gasoline is very very energy intensive. If a car uses 8 L for 100 km and a 10 kWh worth of energy, then tankage of 40 liters gives about 50 kWh of energy. Done in 50 seconds this stream of gasoline through the hose is worth 1 kWh per second or 3.6 megawatts. High enough temperature superconductors have not yet been invented that would make a hand-attachable 3.6 megawatt car charger possible. If we generously assume 240 Volts and 40 Amperes, the charging power is only 10 kilowatts. The largest home appliances like sauna stoves and water heaters are in the single kilowatts range. They often use 380 V three phase power here, but that gets slightly impractical for a car charger. This thousandfold disparity in energy replenishment speed is striking. An optimistic 10 kW charger would charge a 100 km drive’s worth of energy in an hour. Certainly useful for commuters. Charging as range extension seems doubtful. Our summer cottage is 300 km from Helsinki. If a full battery only lasts the first 200 km, one would have to stop at a loading station for one hour before one could drive the rest of the way. Not realistic. The penalty of lugging around the heavy and complicated IC engine has to be bitten at this point of battery development.

There exist some pretty high energy per mass battery technologies right now, but they are expensive and use rare materials like cobalt that they can never really be mainstream solutions on something that stores energy in the megawatt hour class. Hopefully with enough money now available, some cheaper and less material intensive ways to store electrical energy can be developed.

Naturally, Finland would be a pretty ideal place to have electric and plugin hybrid vehicles. A significant portion of the populace keeps their cars parked in a spot with an electric socket nearby – those house timers that turn on the cylinder block heater on an hour or so before leaving for work in the wintertime, meaning less fuel use and wear for the engine. It is trivial to use those 240 V outlets for electric car charging. Also, electric cars are actually manufactured in the city of Uusikaupunki, Finland by Valmet. The Th!nk City is one. Too bad because of insane tax policies, it is not actually sold here – at the moment you can only get them in Norway, Austria and Holland. The Fisker Karma electric sports car will also be manufactured in “Uki”. I think they have a long nose on the car for Freudian reasons – since it doesn’t need to hold a long block internal combustion engine – or maybe it’s just that buyers are conservative. And then there’s the e-cars now project aiming to refit old Toyota Corollas with electric motors and batteries. But there’s more.

There’s that going on, which is actually interesting! My favorite vehicle is the Peraves E-Tracer.

Here are the results from August 2 but I still don’t know what will change / what is coming because the pages are unclear: [EDIT: fresh info at the blog indicates some testing is still going on]

The Raceabout team is from Helsinki’s Metropolia university of applied sciences. They have a long background of building electric vehicles, and it’s nice to see something in the competition that looks like an actual car, yet still manages to do so well.

Hopefully the politicians here can get something sensible done, and the super-high taxes on electric vehicles (basically, anything that isn’t gasoline or diesel is considered fishy and is taxed hugely) can be dropped so we can start seeing more of them here! The current situation is a travesty!

1 Response to The Last I4