The US Air Force Tries To Do Reusables

But is not a real RLV program. It’s just a narrow test for one technology. Hence I think naming it Reusable Booster System Pathfinder is misleading.

They overspecify the problem by requiring a glide landing. Why is it superior to powered landing? At the moment, there’s no clear reason to believe it is! Both need to be developed further to understand their advantages and drawbacks. To my knowledge, there have been only six liquid rocket VTVL prototype manufacturers so far: McDonnell Douglas, JAXA (who was the contractor?), Armadillo Aerospace, Blue Origin, Masten Space Systems and Unreasonable Rocket. Only a few of those have flown to higher than a few hundred meters. The design and operations space is mostly totally unexplored.

Nevermind the large number of other alternatives to boostback. Jon Goff had a recent “lecture series” about these.

I understand that this is just one program, but this should not gain the status of the reusables approach of the air force – stuff like that easily happens.

They also discard evolution and competition – instead just requiring a single masterfully designed prototype before something operational. Sure, this is much better than starting a multi-billion dollar program without a first lower cost prototype, but nevertheless, it sucks. Somebody brief them on newspace! Rand Simberg, Monte Davis, Jonathan Goff, Clark Lindsey, or one of the numerous people who get it. Or one of the prominent company leaders: John Carmack, Jeff Greason, David Masten.

Just specify some boost delta vee points and let companies demonstrate progress towards that. A popup tailflame lander would perhaps give more vertical velocity while some good glider or even a booster that has engines for cruising back could boost far down range to give lots of horizontal velocity. There ain’t a clear winner – there might not even be and multiple approaches would have their uses.

I quote from the document (some emphasis mine, and comments in [] brackets):

The RBS Pathfinder program is structured with four phases.

1. Phase I – Initial Design. This phase consists of trade studies and analysis to mature the RBS Pathfinder system concept and test plan.

2. Phase II – Detailed Design and Integrated Propulsion System Test. [It’s good that you test the propulsion before building the craft]  This phase consists of completing the RBS Pathfinder system design and test plan. Also included in this phase is a ground test of the Pathfinder’s propulsion system. This test should include as much flight or flight-like propulsion system hardware as practical.

3. Phase III – Ground Launched Flight Test. This phase consists of the fabrication, assembly, check-out, and delivery of the RBS Pathfinder flight system and operations control center. It also includes support for the ground launched flight tests of the RBS Pathfinder. At least two ground launched tests are expected in Phase III. [I expect more tests as there will be envelope expansion.]

Table 1 lists the Key Performance Parameters that must be addressed by the RBS Pathfinder program. Examples calculations and further explanation the Phase IV KPPs are included in Appendix A to this announcement.

Table 2 lists additional characteristics of the RBS Pathfinder that should be achieved to the maximum extent practical.

Seems it’s surprisingly heavily dependent on the aerodynamics of the turn. Mach 2-3.5 at only 6 km height. I expect the final vehicle to resemble the X-7 / Starfighter, or then a tailless delta / Mirage. Without the air breathing propulsion of course.

X-7:Relatively short very thin little swept trapezoidal steel wings that can take the heat and don’t produce huge drag. Since the center of gravity after the boost is aft, because there’s not much propellant, the wings can potentially be quite aft and serve as tailfins not killing stability at launch. A separate tail is the easiest from some point of view.

A delta wing might not need to be so thin and could house the landing gear and the elevon mechanisms, freeing up space in the fuselage. Though the turning might be too slow without a tail or the L/D might be bad when turning. This doesn’t probably matter though as all that can be done by the gimballing propulsion system. Landing might require high AoA that means a long nose gear or slamming when landing.

Another alternative is a completely deployable narrow chord high lift cambered wing. A scissor wing, two variable sweep wings, or even a diamond wing like on the Small Diameter Bomb. 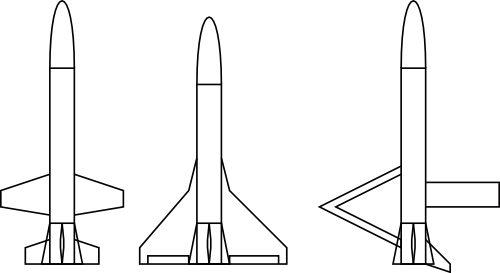 If the RBS Pathfinder system requires a launch assist system for any of the rocket-back flight tests, the contractor shall perform analysis and verification testing in support of the integration of the RBS Pathfinder system with the Launch Assist System. Launch Assist Systems options include, but are not limited to, serial and/or parallel burn rocket assist systems and/or a carrier aircraft.

So one could use a carrier aircraft or two stages! This gets interesting. Could some old missile do this?

2 Responses to The US Air Force Tries To Do Reusables