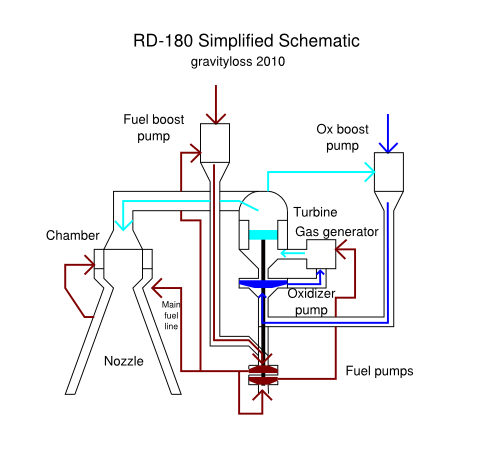 This is a bit different from the NK-33 done previously, but it’s still a full flow oxidizer rich staged combustion lox-kerosene engine.

It has no gears and no flexible shaft coupling between the pumps like the NK-33, making it a real one axis engine – except that it has separate booster pumps at the engine inlet. The fuel booster pump is powered by the fuel tapoff after one main pump stage and the oxidizer booster pump by the turbine exhaust. The starting is also different, but I omitted the starter hardware from the already complicated diagram, as it’s connected to many places – the main chamber, the gas generator and the first main fuel pump inlet. Also various valves, controllers and the tank heat exchanger are left out. And naturally I left out the other chamber and nozzle as well.

Perhaps it can be thought, simplified, that the boost pumps are only hydraulically and not axis coupled to the main shaft system, and hence both can be better optimized to their environment (like lower rpm for the boost pumps) and hence the system can reach higher pressures than the NK-33, where the two oxidizer pump stages are on the same shaft. Or then it’s the later materials or more advanced pump design, after all the engines have some ten to twenty years between them.

Source for the drawing and explanation is this patent no. 6226980. Also, lpre.de has awesome pictures of the hardware, including the shaft with all the pump stages included. I assume it’s machined from one solid piece. Also pictures of the pipe stack injector / mixer and more diagrams of the engine operations. I don’t know much Russian (having finished half a course back somewhen), but if you know most of the cyrillic alphabet (helps if you know math as it’s very close to Greek), it’s practically quite easy to read as there are so many loan words – gasogenerator should not be a mystery to anyone. 🙂

The workhorse Soyuz RD-107 and RD-108 engines are completely different as they use a hydrogen peroxide gas generator design – very old-fashioned – but the RD-0124 used on the more modern Russian upper stages is the third interesting kerosene staged combustion engine that might become even more actual if Orbital are going to use it as a second stage engine on their Taurus II (currently they are moving on with solids). The fourth staged combustion engine is the RD-120 that’s bigger than RD-0124 and is used on the Zenit second stage. And then there’s the often overlooked forefather of staged combustion, Proton’s RD-253 / RD-275, that uses hypergolic propellants. The RD-0120 hydrogen engine of Buran / Energia is interesting as a comparison to the similar SSME. So there’s still plenty of study subjects in the Russian engine families.