Ode to the Canonet Camera

I have a Canon Canonet 28 sitting here in front of me. It’s a seventies brushed aluminium and black grip film camera with exposure automation, you just have to focus it yourself and push the button. It uses regular 35 mm film and has a fixed 40 mm F 2.8 lens. It was easy enough to use that most of my childhood is documented with it, and the picture quality was good (provided the person shooting had focused properly, also shooting against the light made the simple light sensor underexpose the picture). Towards the camera’s thirty year anniversary, around 2000, the shutter started failing, requiring taking it into a repair shop a few times. (By the way, although the linked page claims otherwise, it does not have a self timer.)

Having learned to shoot with this camera, I’ve always despised autofocus and other people’s blurry photographs. Here the operator had absolute control of where the focus is. This is both good and bad, but at least there’s no-one else to blame. I found the yellow ghost image focus system to be quite easy (if not always fast) to use and it guaranteed very precise focusing. 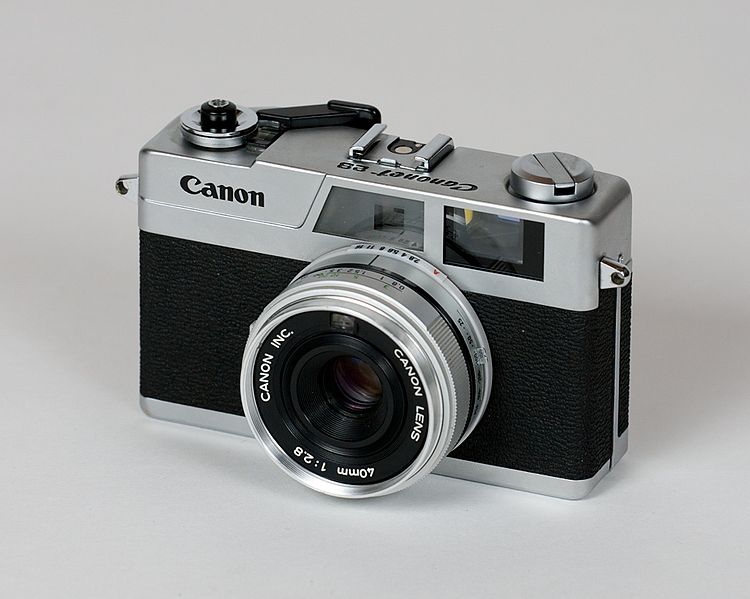 Canon Canonet 28, from Wikipedia, see the viewfinder and the focus ghost image viewport at the top of the front side. The light sensor is just above the lens. The thumb winder is the lever attached to the shutter. The focus ring is at the front of the barrel.

Much later a Nikon F60 SLR film camera was acquired. After some time, when searching for a cheap second hand fixed lens for the SLR, I ran into a cheap Canonet QL 19 and bought it (it’s somewhere among my stuff right now). The whole camera was cheaper than a prime lens for the Nikon! It has better power at F 1.9, being basically a more expensive version of the Canonet 28. You need to do semi-manual exposure control though, by setting the shutter yourself and let the camera handle the aperture, so in that sense it’s more complicated. You also can use really long exposure times and also use the mechanical auto shutter (that gets sometimes stuck!). If you load sensitive film into it, all kinds of exciting photography becomes possible: color photos in the night, without a tripod. This was the cheapest way to low light photography, handsome on a night bird listening trip.

These Canons are both rangefinder cameras, meaning focusing is done by aligning a yellow “ghost image” onto an ordinary image. They have fast optics, meaning they gather a lot of light. This was important because the earlier films were much less sensitive. Later, when disposable cameras with lousy optics were developed, they needed a much more sensitive film to compensate (it was cheaper to manufacture them that way with bad optics and good film). Now, couple the modern sensitive film with an old fast lens and you get great pictures even in low light. Because they are rangefinders, they also don’t have a big mirror giving shutter delay, a shake and clacking sound with every shot. Instead a quiet, whispering click can be heard – and also, the viewfinder view does not go black during the exposure. The compact size enables you to carry them more easily than an SLR. They still weigh quite a lot because of the metal construction, though that helps with steadying in hand. You do need good eyesight for focusing. A flash can also be attached. Film winding is with the thumb. This must be remembered after each shot, otherwise when you press the shutter next time when you have just aligned for a perfect opportunity, nothing happens! This also means the camera only needs a tiny watch battery for the light meter and can operate reliably for long times (years) without battery change or in very cold weather.

I’ve done most of my film photography with the Nikon SLR which is very versatile with the wide and long zoom lenses, but the Canonets have had some appeal. They might be excellent for street photography and possibly some journalism, when you don’t need long zoom distances or very wide angles. I also love natural light and don’t like flashes. They are much less menacing than a big SLR and don’t have the mirror clack and film wind whirr sound when taking a picture. It’s still much harder to do a composition with a prime lens, and I’m not a good at composition to start with. You could probably learn to work with it much better, immediately seeing what kinds of pictures you can get without having to look through the viewfinder, if you made a constious effort. Enthusiasts actually hold both eyes open when using rangefinders, I only heard of that technique quite late.

What are the Canonet series’ spiritual digital successors today? Probably Canon’s G series high quality fixed lens cameras. They still sport a purely optical viewfinder and I’ve seen some good quality photos made with them. Bracketing and a flash socket are a nice feature uncommon in pocket cameras as well. There are other manufacturer cameras in the same class. Back in the film days, there theoretically was not much image quality difference between a reasonable 35 mm fixed lens camera and an expensive 35 mm SLR. In the digital world however the fixed lens cameras usually have very small sensors, which leads to many things and is a subject for another post.

Most digital cameras have much less light power nowadays. Digital sensors are more sensitive than film, which is one reason. Also, the high power wide angle lenses in rangefinder film cameras (fixed lens and Leica) were possible because the light can strike the film at quite a shallow angle and still be captured, but CCD and CMOS sensors can’t do that. The light has to go through a Bayer filter first before it strikes the sensor and that means a relatively steep angle is needed. SLR:s have that since the lens is far from the sensor anyway (because the mirror has to be in between), and thus they were made into digital cameras relatively easily. But there are few digital rangefinders. Subjects for the next post.

2 Responses to Ode to the Canonet Camera