Starship (this is nice):

Avanti (this is boring and low quality):

Starship: First flight in february 1986. Powered by Pratt & Whitney PT6A-67A turboprops 895 kW each, designed by by Burt Rutan and Scaled composites, the maker of planes that fly around the world nonstop, or rocket planes that go to space. Photos: 1 2 3

How do they compare in performance?

The picture found on a French website speaks quite a lot (translation should be trivial): 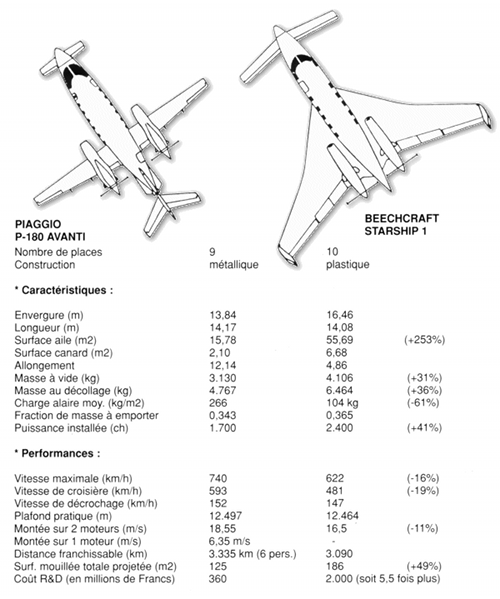 The Starship is a bit bigger overall but still, it has a proportionally stupendous wing area and suffers high weight and high drag as a consequence, being slower despite more power. The three surface configuration of Avanti could also help to minimize trim drag in cruise.

The cabin space looks to actually be not that far off, since Avanti’s nose is shorter. The Avanti has thin straight laminar flow wings that give very little drag. Has someone been into both cabins who can comment on the internal room?

Landing speed is surprisingly similar, 150+-3 km/h for both. Even if Starship has half the wing loading. On the other hand, it probably can’t fly at a high angle of attack or use large high lift devices because the “stalling canard” control arrangement. The rear end of the large chord wing is so far behind that the nose down moment from bigger flaps could simply stall the canard.

Could these be the reasons why the Starship never became a commercial success, with only 53 having been operated commercially? A big aircraft compared to its capability? Avanti on the other hand at least has made and is making some sales, over 150 have been made. I’ve heard stories about how Scaled composites didn’t know how to make commercially operational craft back then, and maintenance folk actually had to cut holes in the skin to do some work. The french site claims Starship used over five times the research development budget, and the craft looks like an enlarged EZ, so nothing that novel aerodynamically. What went wrong? Is it the composites, a bridge too far?

I find comparisons interesting. They put matters into better context than just examining features of things alone. I feel it is done far too rarely – when reading about technical histories, they follow one project at a time and the reader can’t form a comprehensive picture of things or give meaning to the years and numbers thrown around. I was actually working on a free print-it-yourself trump card game with rocket engines some years back, to help familiarize oneself with their features, I still think I have the publisher files stashed somewhere. (Too bad it still is impossible to find even a semi decent page layout program for free.)