I always had a different idea compared to the one Jon and Kirk posted, (Kirk Sorensen is now a contributor at Jon Goff’s place, I’m afraid having such top men in the same place might cause a awesomity criticality event). I assume this idea is probably found in some old NASA report from the sixties or seventies, like most things are.

Rendezvous is mostly a 4D problem: 3 space dimensions and time (some more if you take into account that proper attitude must be maintained as well, but that is assumed to be trivial). If you can take out two space dimensions, the problem should simplify greatly. This is possible with the following arrangement: 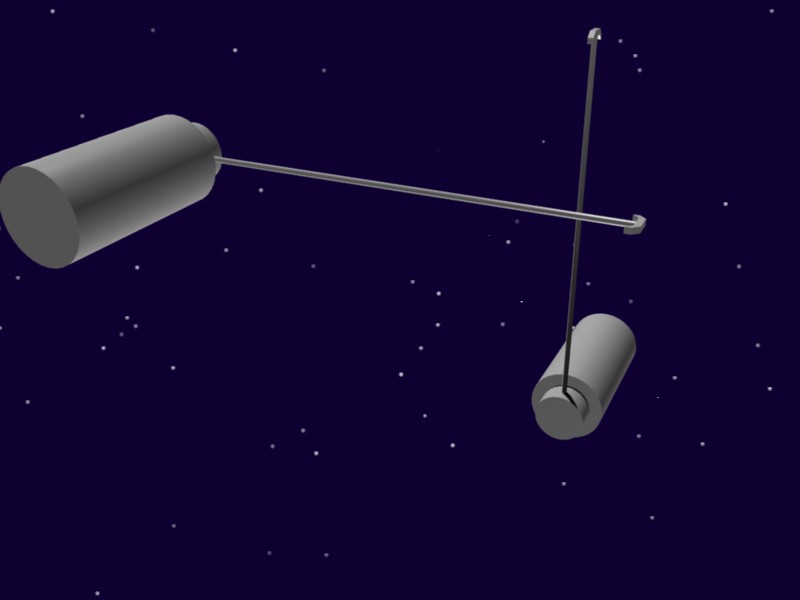 A boom at both the target and the vehicle, placed at right angles (and both at a right angle to the approaching vector). Basically, this should reduce positioning accuracy requirements hugely. The booms could be short barrels (even inflatable), or really long semi-rigid wires or composite girders or whatever. Depends on design aims.

When they contact, they will both slide until one boom is caught by a hook at the end of the other boom. Then one boom will slide through the hook until the hooks contact. From there on it’s a known geometry. You can reel in the boom, if it is flexible, or just slide it if it is rigid, and get both craft to a configuration you want, for either ordinary robot arm capture for berthing (as demonstrated by HTV, many station modules and Shuttle MPLM:s) or traditional docking (Soyuz/Progress/Shuttle/ATV).

This concept has some problems. For example whipping the target or the vehicle with an improper attitude / position boom. In the pictured boom configuration, approaches should have an offset always to one side. Alternatively one could have multiple booms. That way it wouldn’t matter on which side the rendezvous error would be. Also, the target could have a V shaped bow to avoid having the vehicle hitting dead center with a boom.

Another issue is if there is some kind of failure in the rendezvous, like too high velocity, the boom might rip off. That would result in a very dangerous object co-orbiting with the vehicles. This would be a very bad day for something like the ISS or a propellant depot.

One way to avoid this is to have the hooks have a mechanism to give way if the load gets too high. Another more outlandish is to have a weaker boom attachment in the vehicle. This would sever its boom and leave it hanging to the target in case of a problem.

This all was motivated to make unmanned rendezvous much easier to enable cheap propellant depot tankers. As all know, ATV and HTV are hugely expensive and high dry mass systems. Something like a Centaur or any basic “dumb” already existing restartable upper stage with just mostly a working attitude control system (including a star tracker) could be used instead, if some out of the box thinking is deployed. Most of the smarts should be in the target that is launched only once, but it can’t be the maneuvering party since it is very heavy. This system should get the best of both worlds.

2 Responses to Minus 2D Boom Rendezvous