It seems to be such a marvelous rocket engine. A high thrust to weight, high ISP high tolerance design that is still top of the line after sitting forty years in storage – it will be used for Orbital’s Taurus II as a first stage engine.

I drew a diagram on how the engine works internally. 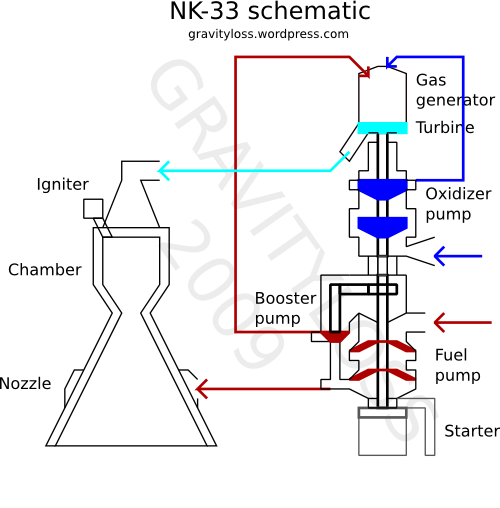 It’s a full flow oxygen rich staged combustion design. Also note that there’s a separate geared booster pump to raise the pressure of the small fraction of kerosene going to the gas generator. This is most likely because the turbine lowers the pressure, hence the gas generator has to be at a much higher pressure than the chamber.

In the modern launcher business, Russia probably still has the best expertise on first stage engines.

With a modest chamber pressure, the full flow oxygen rich gas generator gas wouldn’t need even to be that hot. I don’t know why specifically these kinds of engines have not been tried more often. Maybe SpaceX can do something, they’re one of the few companies designing new engines anymore. This is the logical path after gas generator engines. Remember that perhaps the best known GG engine, F-1, originated from around 1958… It could be seen as an anachronism that the US companies are still sticking to gas generator cycle engines.

With modern day machining capabilities and turbine / pump computer optimization, one should be able to do quite a lot relatively easily.

Source for the data that I made the graphic with: Liquid Propellant Rocket Engines, lpre.de, in Russian.