The April fool’s joke about a secret Finnish rocketry project was naturally not credible, but it was inspired by a few real pieces of history. One has to remember that until perhaps fifties or even the sixties, Finland was mostly a poor not very developed nation where most people worked in the agriculture. The history shows how transformation is possible, and even difficult projects are possible in small countries as well, if given good effort and thought.

Finland had a viable submarine program before the second world war. This was in co-operation with the Germans who were banned from developing submarines in their peace treaty from the first world war. The German side manager of the program, sub expert Karl Bartenbach, came from an assignment in Argentina, where he had unsuccessfully tried to engage in a similar program – and his wife brought tango dancing to Finland on the way from there. The submarines were successful and the first real German built U boot type (after they didn’t care about the treaty anymore) was actually similar to the last Finnish model. The Finnish subs were a real threat to the Soviet navy during the war (after mines and guns), and one sub successfully rammed a Soviet sub (after missing a torpedo attack). I’ve read a book (in Finnish) about this, but the name escapes me.

Between the wars, Finland had started a state aircraft industry, which built mainly trainers. During the war, there were attempts to develop an indigenous fighter, but the results were failures. There were no large enough import engines available, and the main effort, VL Myrsky had flutter problems. None really engaged in any combat. Finland got german Me 109:s at the end and fought with them. After the war, the designers said that they had had the wrong construction approach and mindset from the slow speed trainers, wood ribs and rag. There was no aluminium production in Finland, and high quality wood glues were hard to get from the troubled Germany. Many pre-war wooden trainer planes lasted fine in use while the substitute emergency developed Finnish glue built wooden fighters suffered moisture related problems. Jukka Raunio has written good books (in Finnish) about the subject, two which I’ve read, “VL Myrsky” and “Valtion lentokonetehtaan historia, osa 2”.

This time a completely Finnish development. The Soviet Union was looking for deep sea research submarines in the eighties. After scouting around the world for various builders, the Finnish Rauma-Repola shipbuilder was contracted, and they formed a completely new subsidiary, Rauma-Repola Oceanics, for this purpose. The main problem with a deep sea submarine is the weight of the pressure shell. There were Canadian companies who proposed welding it out of Titanium plates. Instead of that, Rauma-Repola developed a new steel that was cast with a proprietary method to avoid pores. CIA tried to intervene, since the submarines were of strategic use, and they contacted president Koivisto. He said that the business was private and completely legal and thus he could not and would not interfere. The electronics and composite parts were indigenously developed as well, since American contractors were unavailable. Against the expectations of observers, the subs were very successful, and still operate to this day as Mir 1 and 2 – they have visited Titanic for example, as seen in the movie. Almost nobody knows that they were developed and built in Finland. After the delivery of the Mirs, the sub industry was driven down by direct pressure from CIA, the company officially citing that it was not profitable. The technology to make the pressure shells is gone today and would have to be redeveloped if more were to be built. There was a lengthy magazine article (again in Finnish) in Tekniikka & Talous about this, which is available on the net.

Where did the photos come from? They are actually from real Finnish projects, although of far lesser scale. The engine is Juhani Hemmi’s completely from scratch self built regenerative steel rocket engine. The picture is from an issue of Avaruusluotain, the magazine of SATS, Suomen avaruustutkimusseura (Finnish Space Research Society, for which I also write a column sometimes). Unfortunately mr Hemmi doesn’t have a web page and I don’t know the current status of the project, the article being from 2006.

The from the air picture is from the Pollux / SATS hybrid rocket project “Haisunäätä”, that had its second launch in the fall of 2008 in Rovajärvi, Lapland, which is an army proving ground. I know these guys, and they are making a bigger rocket (if it’s not ready yet), for a first flight soon. At the moment the rocket and motor are commercial conventional off the shelf ones, but the electronics are self developed. There is a competing team in Tampere, “Supikoira”. 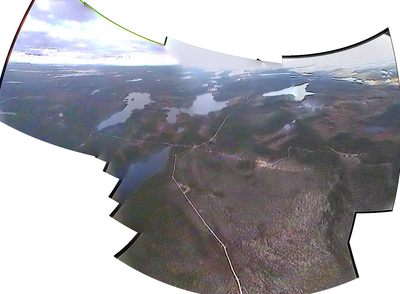