Practically all other issues like transport fuels are secondary. They are harder and smaller problems. Nevermind taking CO2 from ambient air. Let’s first do the biggest and easiest job. This is looking at the next few decades.

To get rid of coal, do all of the following simultaneously: 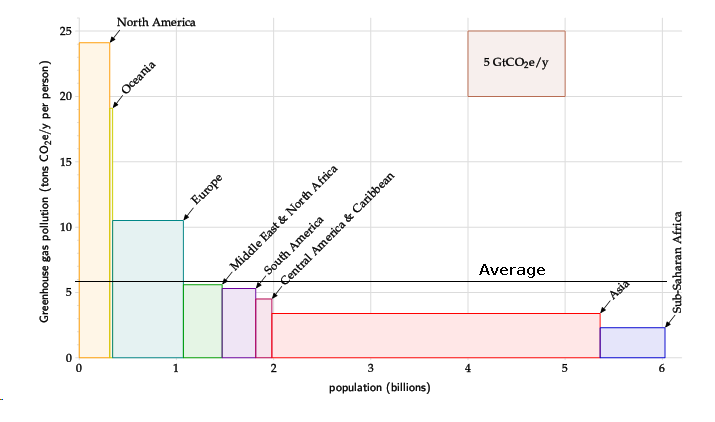 CO2 production of regions, modified from “Sustainable Energy – without the hot air”

Although the graph above could suggest that North America, Oceania and Europe should be the first to do reductions to keep it more equal per capita, in the current freely moving global economy that is not all clear – in many cases the emissions would just be transferred to other locations.

First a primer on why there exist laws in the first place.

Practically, the only aim of publicly traded corporations is based on producing maximum profit for the shareholders. (Corporations are not good or bad, they are just mechanisms.) People as well choose the least effort with maximum personal benefits. On average, humans are no martyrs.

These are both reasons why there are no anarchistic societies around – societies with rules and laws turned out to be more efficient. When you are not in constant danger of being taken advantage of by anyone (be it a corporation, mob or a person) who wishes to do so, you can spend your energy on actually beneficial work. If there are common decisions that these are the laws (concepts of ownership, murder etc), everyone’s life is easier. This is basically the difference between anarchy and a legal society. Legal societies accept the limiting of freedoms. For example, I do not have the freedom to murder my neighbour or take his car, even if I wanted it, and I view that it is a good thing that this is the same for everyone.

So, stock owned corporations and sufficiently large groups of humans can mostly only steer themselves through laws that affect everyone on the field. If a company CEO strays from maximizing profit, the company will get into a competetive disadvantage and the stock owners either sue him, fire him or move elsewhere. A person doing ethical decisions when most others act unethically is just making a personal sacrifice. It is not generally justified or reasonable to expect a large proportion of people to suddenly voluntarily change their ways to ones with less immediate benefit for themselves, when there are still so many not doing it. Nor is it that likely. Hence education and individual voluntary action are usually inherently very limited means of doing any measurable changes.

And then on to more specifics regarding CO2.

So, justified solutions would be level playing fields where the CO2 emissions have similar prices for everyone. From the people’s point of view, this  could be individual CO2 quotas, or quotas given to nations according to the population size. Or alternatively varying concepts of taxes on personal CO2 production, given back to all people (so the average producer would have zero change from the no-tax situation). From the industry’s point of view, the leveling could be CO2 taxes on products according to the amount of CO2 emitted during production – not related to where it is produced so that the international playing field is level.

For example, in China most people are very poor and produce little CO2 per capita. Does this mean per capita quota laws should be made so that China was able to produce export steel with more inefficient processes generating more CO2, resulting in the shutdown of more efficient steel plants in the west? My opinion is no. Hence, only per capita CO2 emissions regulation does not make that much sense.

I will post more about this in the future, as this post is just a short overview.

Completely centrally led  economies are very inefficient failures. Private industry in many cases is much less corrupt and more motivated and efficient. But only if they have incentive to be. Hence, if there was a price for CO2 emissions, it is conceivable that much more sensible places where they can be reduced could suddenly be found, than with any complex regulations mandating direct methods of reducing CO2 emissions. This is exactly what markets are good at, doing the maximum with minimum cost. There would actually be competition and multiple privately developed solutions for each problem field, and the best and most cost effective would be chosen automatically, with those people who know the best with the hands on experience, and not some politicians.

I see many otherwise free market advocating people saying that there should be no price for CO2, instead the government should do some R&D and then give solutions to the industry. I think that is naive. Why would companies move to less CO2 producing technologies, if there was no cost in producing CO2? How would people in the government even know which R&D programs to do? And these projects would be funded from taxes anyway and thus paid by the consumers and companies. And they would be adopted only if they were otherwise significantly cheaper than the old methods, and probably in most cases they would not be. There probably just is no free lunch, unless someone invents something totally game changing very soon.

The CFC:s are a good example of that. The companies were lobbying against their banning, but when it was evident and imminent, they simply stopped complaining and developed working alternatives.  You get exactly what you order. A significant amount of people don’t even care to treat waste water if there no laws mandating it, which is evidently a bad thing in many places around the world, leaving the people downstream with no clean drinking water.

It is important for governments to do long term basic research and even investments, but if CO2 emissions had a price, it would be profitable for companies to research and invest in less CO2 producing technology themselves.

Take for example nuclear power. If there are CO2 taxes, that makes nuclear power more profitable than coal and it will automatically replace it. Also, somewhat similar for solar power. It is most of the time not wise to mandate very inefficient feelgood solar plants in cloudy areas. That is just theater. (On the other hand, it is sometimes worth supporting industry that is in its infancy and not immediately useful, but has potential in the further future. But feelgood projects are the wrong way.) But if the solar plants are built on profit and cost/benefit mechanisms alone, then they are probably built in more sensible places.

Cap and trade is problematic in many ways. Those who had already upgraded to more efficient industries by the reference year (on which the cap is based on), suffer more as they can’t do cheap cuts anymore. Or the governments can deal the quotas completely arbitrarily, making the playing field between industries very uneven. A CO2 tax might be better in this way. I am no economist or tax expert so other people have probably more intelligent things to say about this.

Who should do what in politics?

Governments should consult the best experts and build together some schemes of putting a price on CO2 emissions, beyond the Kyoto cap and trade, which can be seen as a first draft policy. Lessons should be learned.

Most of the CO2 producers (by tons and by tons per capita, at least, for justice reasons) should be in these schemes. Places like Africa don’t matter, they matter little in the absolute and the relative sense too. Also those with high over time integrated total emissions should be spearheading the effort. The schemes could be designed to also affect those who are selfishly staying outside, for example with added CO2 import taxes when importing from a country that is not in the CO2 tax scheme (or possibly even, but to a lesser amount as it is more problematic, export CO2 benefits, if exporting to a country which does not have the scheme) to keep the products competitive on equal grounds.

Many government R&D projects should be funded, but not too uncritically, as they tend to bloat. Some overly complicated legal barriers, for example with nuclear research and power plant building should be removed (not completely left without oversight of course). Private research and development could be stimulated. Possibly even with things like prizes – though a price on CO2 already would stimulate the industry hugely.