The first stage worked flawlessly but the staging malfunctioned. I wasn’t watching, but went to bed at 4 am local time after waiting through some launch delays, thinking that it’d take forever anyway, and of course the launch was right after.

What’s always been a mystery to me, if SpaceX is selling their Falcon 1 rocket at just about eight million dollars, why don’t they do a lot more test flights with dummy payloads? It seems that it would accelerate development a lot, since the hundreds of workers can’t be cheap to just keep working – a delay of a few months in selling some rocket flights will surely be costly.

During the webcast run-up to the launch, they showed Elon Musk doing a tour of their factory, and everything in their production processes seemed well automated and thought out, since they have to do so many engines for Falcon 9 anyway. Just to mention the totally automated copper milling for the chamber and nozzle root liner, as well as the automatic pipe bending machine for the nozzle. 80% of the hardware of Falcon 1 is produced in house from bare metal.

On the other hand, the Merlin 1 main engine has gone through many changes, with power increases (don’t remember if the turbomachinery or injectors have changed) and the regenerative nozzle at least. That means early flight testing could not have been very representative of the design or the build or integration processes. Now they seem further along in that, with the Falcon 9 first stage recently having done a full-up hold down firing of its nine engines.

There’s something fundamental about the whole issue of designing vs testing. It’s not a totally simple picture, with the current advanced computation and simulation capabilities making the boundary fuzzy. And there has always been partial hardware non-destructive testing too, like structural test models. So, can expensive destructive test flights be seen as just an extension of finding a workable design, as well as production, integration and operation processes? In that sense they all can be pooled into one, as just means of getting to some combination of capability, cost and time goals.

Even if there are no rigid mental boundaries between development and testing, one still has to make more careful judgements before doing a very expensive destructive flight test vs running a few minute configuration simulation. Of course you have to be careful with time allocation in design too, conceptual design is one tool for that, to avoid spending huge amounts of time and thus money for elaborate dead-end designs and configurations. The previous post is about that, where NASA spent a lot of design time for launchers and components that ended up too small anyway. But actually they started from very far and little assumptions in ESAS, eliminating lots of fundamental concepts in a tree analysis, pictured below. 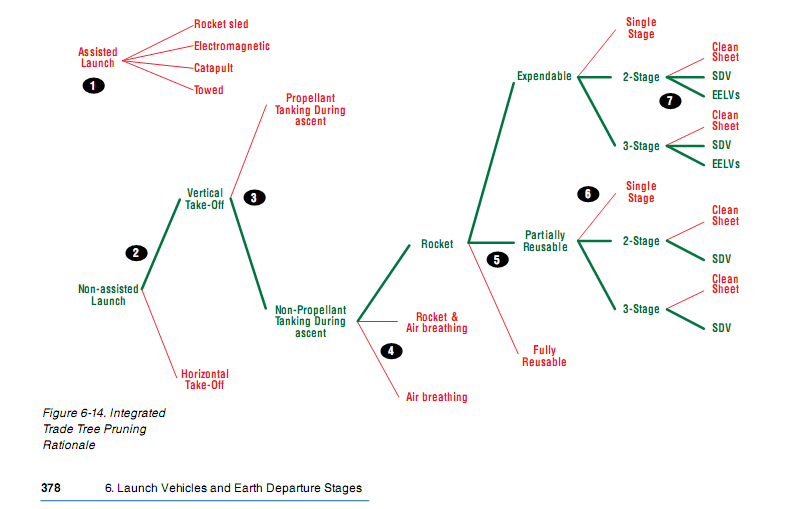 Conceptual design is from the top down, but real hardware testing is from the bottom up. Both are needed to work in a real capability. Armadillo Aerospace’s John Carmack has mentioned innumerable times how building working hardware always discards too ambitious and overcomplicated designs (I have to shamefully admit, I have very little experience in designing built hardware, though I am in the process of changing that). If you only do conceptual design without basing anything in real hardware, you are moving on very thin ice. The NASP program was quite a good example of that. 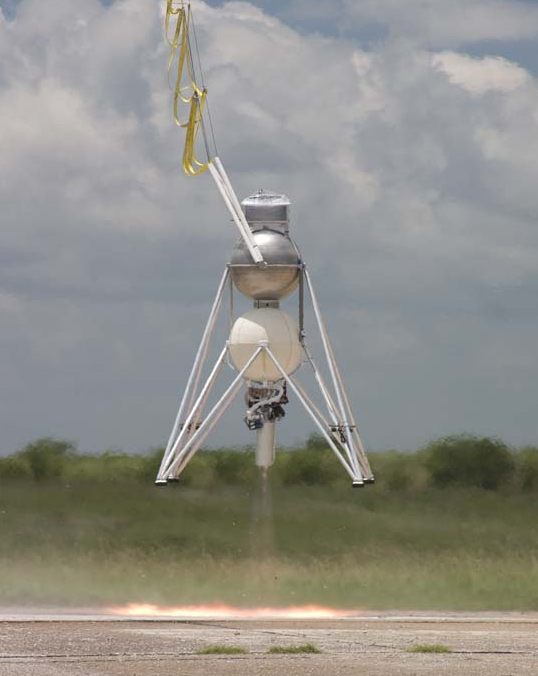 In a sense, Falcon 1 is the hardware and process test platform for the real rocket, Falcon 9. Now that SpaceX seems to have their production line ready, I hope they would just do Falcon 1 test launches in rapid succession to iron out their bugs. (Of course, first do a lot of nondestructive ground testing, like for the pyrobolts this time.) Hopefully without charging money from the payload customers.

Again, when looking back to Wernher von Braun, after V-2 he proposed in USA the development of some new rockets and humongous amounts of test launches were included in the plan. Hardware got more reliable and rockets bigger and more complicated and thus expensive, which eliminated this approach, but it is an interesting historical mindset and viewpoint.

And again, too, of course, the fundamental property of expendable rockets that every flight ends in destruction, prevents economic partial testing. You can’t do careful envelope expansion or survive flight anomalies. Reusable flight vehicles on the other hand allow a lot of flight testing.