Bringer of the Second Nuclear Age

Thorium is about thrice as abundant compared to Uranium. And countless times more abundant than the U-235 Uranium isotope that is used mostly by modern nuclear reactors.

You can use Thorium, Th-232, as the sole fuel in a special nuclear reactor, which first turns the Thorium into Uranium, namely, U-233, and then splits it in fission. The good thing is that very little Thorium is needed (under 1000 kg per gigawatt year), and no isotopic enrichment (that Uranium needs to separate U-235 from U-238 ) has to be done, and there are practically no transuranic products from the reactor (that’s the long-lived radioactive stuff). The reactor is called the Molten Salt Reactor – MSR, or the Liquid Fluoride Thorium Reactor – LFTR. The trick is to not use any fuel rods, but have the nuclear fuel in a molten salt. More on why this is done below.

A U-233 atom receiving a neutron splits into fission products, giving energy, and also gives off two neutrons (statistically, a bit more).  One neutron is used to hit another U-233 so the reaction continues, while the other is used to turn Th-232 into U-233. This is called breeding, where enough neutrons are produced so they can, in addition to keeping the chain reaction going on (like in all current nuclear reactors), also “breed” new nuclear fuel.

Now, there are some breeder research reactors working with U-238, the more common Uranium isotope, being bred to Plutonium Pu-239, but with Plutonium the problem is that you have to use fast spectrum (otherwise there won’t be enough neutrons), which again often brings some controllability issues. Also, nuclear bomb material can be produced because Pu-239 is easy to separate chemically compared to the different isotopes of Uranium which are chemically similar. U-233 from a Thorium reactor on the other hand is not very suitable for bomb material, and there are options to denature it while in the reactor so it’s unusable.

The Th-232 / U-233 MSR is unique in that it can be a breeder reactor in a thermal spectrum. This is achieved with keeping both the fertile and fissile material in a molten salt, Thorium and Uranium Tetrafluoride. (ThF4 / UF4.) The reactor core is filled with Uranium while there is a blanket of Thorium around. When a Thorium atom changes into Uranium, it is taken out of the blanket by bubbling the blanket it with Fluorine gas which turns the UF4 into UF6, a gas. It is again reduced to UF4 with hydrogen and then put into the core. This is the critical idea of the molten salt reactor, continuous reprocessing. Also, the fission product waste can be removed during continuous reprocessing (vacuum distillation). The molten salt also enables harmful fission products like Xenon to bubble out of the molten salt immediately so they don’t worsen the neutron economy by capturing neutrons themselves (a significant problem in current reactors, limiting their fuel use percentage.) 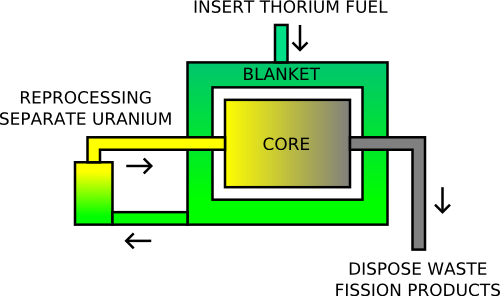 The MSR has been demonstrated in the US Oak Ridge National Laboratory in the sixties and seventies with multiple prototypes, but the development stopped since the fast uranium breeder was the way chosen instead (for a variety of reasons, many of which are not valid today).

Many think that it could be a good solution to the energy crisis. It is relatively known technology yet changes the nuclear equation hugely, by reducing fuel needs AND waste immensely, multiple ten fold. 1000 kg per year for a gigawatt sized plant would mean you could run 30 years with one container of Thorium. The waste, of similar mass, could be relatively safe after 300 years, since it would not have much transuranic elements.

Sadly, most nuclear engineers have not even heard about MSR / LFTR. There is a lot more material on Kirk Sorensen’s site, energyfromthorium.com, most highly recommended.

As Alvin Weinberg said, we are still living in the First Nuclear Age. The Molten Salt Reactors could bring the next one.

I’ve been planning a few posts about molten salt reactors so this is an introductory post to the matter. Please, ask anything in the comments!

7 Responses to Bringer of the Second Nuclear Age