The Constellation program has been going on for about 3 years. Kicking off with the ESAS study of a few months, it still hasn’t settled very much about the architecture. Even the number of solid segments and liquid engines on the Ares I and V launchers are uncertain – issues which mean a lot for the infrastructure. A high launcher means VAB rebuilding. A heavy launcher means new crawler ways. Everything seems to be reassessed constantly.

Ed Kyle has documented the Ares I and Ares V history, while I discussed the future of Ares V here, the picture is from that post’s presentation. At the moment the design has moved along from the first configuration in January, having added half-segments, more core length and a sixth RS-68. No move to HTPB rubber in the boosters yet or composite wet parts EDS IIRC. 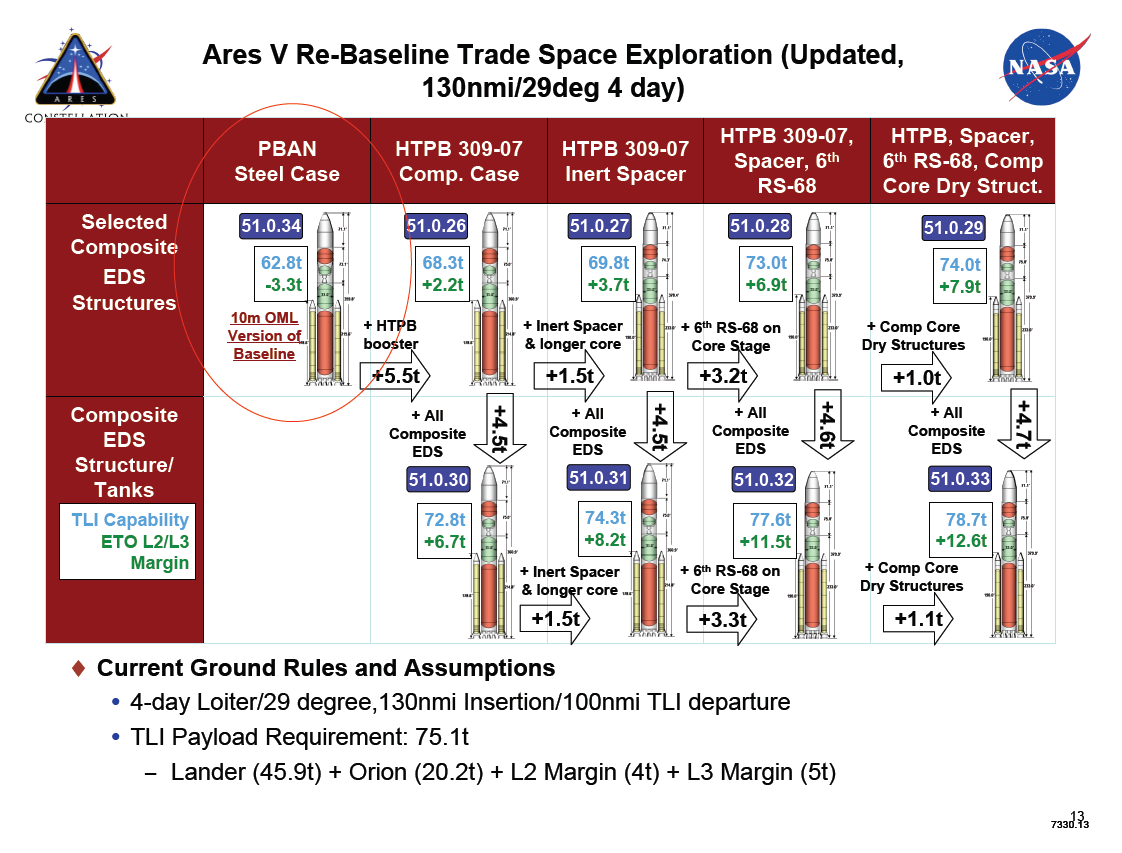 People from inside NASA have lamented the lack of conceptual design skills there, since the design keeps changing too much because of flaws being discovered.

There’s the classic story from Apollo, when Wernher von Braun simply didn’t believe the mass numbers the spacecraft people gave him, and vastly oversized the Saturn V – and it turned out that eventually all the performance was needed.

But the leaps in capabilities were huge back then. Now rocketry is routine and there is already one example of a lunar architecture to compare to. Not many new engines need to be developed for example, and a lot of the hardware is derived from STS and other flying systems.

So how is it that an agency getting 15 billion dollars a year is failing to pin down the mass numbers any better? Over ten ton sudden shortfalls in LEO mass seem to be a lot. Of course, it is a hard problem, and it’s easy to carp from the sidelines, but still…

What will the payload landed on the moon be? What propellants are used? What is the Altair’s or Orion’s mass? And work back from there to TLI mass and ultimately to launch from Earth, all with generous margins. And it has seemed that a certain cycle has formed. First a solution on Ares I is based on some logic linking it to Shuttle hardware, infrastructure or Ares V with common elements, which should save a lot of money and time and keep the workforce etc etc. Somewhat later, rumors about a severe performance shortfall on either launcher start circulating. Then after a while NASA announces a new configuration where the commonality is disrupted. And again forward we go.

The decisions made earlier are not supported anymore because new facts (performance problems) were realized later. But these decisions can’t be revisited. (Flying Orion on an EELV is one.) ESAS is referred to as having looked at all that, discarding it. Yet when some changes happen in Constellation, ESAS is mentioned as “only a 90 day study, how much can you expect from it?”. The consistency of decision justification is lacking. Ability for honest introspection is a rare thing for persons or organizations. I am just an outsider and don’t really know what’s going in inside there, maybe all is just exaggerated, but it looks troubled to me. How much can there really be progress if nobody knows what the launchers will be like in the end anyway?

3 Responses to Conceptual Design at NASA