I was recently reading Mark Wade’s Pausanias, Encyclopedia Astronautica’s blog. He called quits from blogging in November 2007, after being utterly disappointed in the short-sightedness and selfishness behind NASA’s exploration architecture decisions, and I quote:

What can be more sobering than NASA returning to water landings and expendable capsules descending under parachutes — technology selected as a ‘stopgap’ measure 45 years in order to beat the Russians to the moon.

I happen to agree with him somewhat in this regard.

I’ve been thinking about this landing problem for quite some time, in how it relates to making space access more hassle free in the return part also. This thinking was also again recalled by the recent Gemini paraglider thread on NSF.

Canadian aerospace guru Henry Spencer often laments how space technology has practically stagnated since the sixties since the research budgets for new ideas were killed. Everything is just the same old same old. The Gemini paraglider was one of those things that “never got a chance again”. 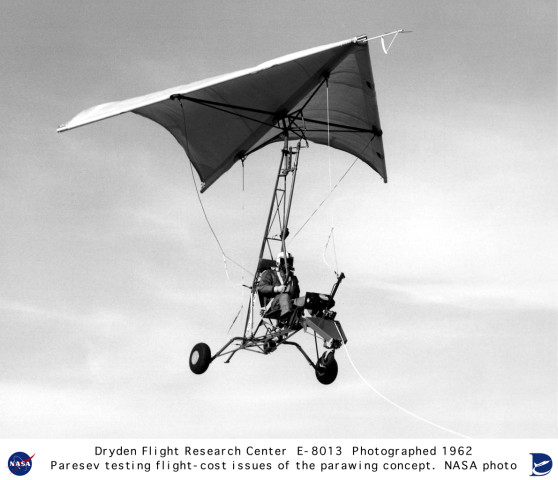 The Paresev-1 vehicle was a towed parawing glider NASA quickly whipped up to test the concept. Its pilots included Gus Grissom and Milt Thompson. Check out the amazing photos and videos at NASA Dryden. At those times NASA and the contractors were still more agile, building new prototypes and testing them quite quickly.

There wasn’t enough time to do a parawing-and-skids landing Gemini in the heated space race, and apparently the development had many troubles along the way.

But in 1962 parawings were a very new technology. The Paresev-1 used a hang glider type steel tube frame onto which the fabric was fixed. Gemini would have used an inflatable structure, which was never fully demonstrated.

Nowadays there has been a huge progress, thanks to the daredevil skydivers and other adventurers inventing ever faster, better lifting and more agile systems. Perhaps the best low mass decent lift system is the ram-air parafoil (patented in 1964 and improved considerably since). It is wing-shaped and stays quite rigid by pressurizing with the ram air on the front. Parafoils can reach high lift to drag ratios. It is a technology that is worlds better than the old Gemini parawing. 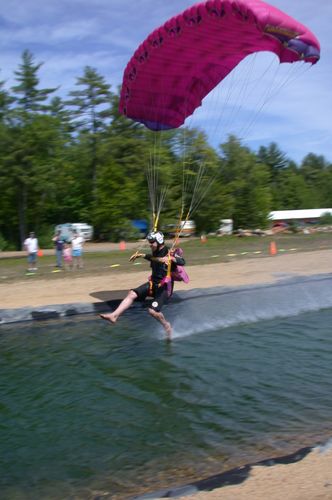 But why not use parachutes instead of parafoils? Well, they have problems. You can not really steer them much at all. There is very little lift and mostly just drag, which means that the descent speed is quite large compared to the chute size. And it also means that you can’t fly them.

Flying has numerous advantages compared to falling. You can do a flare move just before landing to make the landing very gentle. You might need skids or even wheels though in case the flare doesn’t stop you completely. And you can navigate when you fly. Precision skydivers routinely land their foot directly on a point target in competitions. If your ram-air parafoil has a lift to drag of 10, and you start gliding at 5 kilometer height, you can theoretically pick any landing point in a 50 km radius. You can land on a runway. You can have better L/D than the space shuttle, meaning an easier and more flexible and maneuverable landing.

The paragliding world distance record is actually a whopping 460 km. Wikipedia also has a nice page about parawings. The airfoils are approaching rigid wings in performance.

Overall, parachuting has evolved orders of magnitude more than rocketry in the last forty years, here’s just one link telling of the history of the parafoil.

In practice of course, there are limitations. In a space vehicle, you don’t want to pack in a big parafoil. And that means that you must fly fast to stay aloft with a small foil, and ram-air parafoils do have lower speed limits than wings naturally. Also, winds affect slow speed vehicles a lot, you can’t make that much distance gliding to headwind. Winds can help at reducing landing speed nicely though, if you have a runway with the right direction.

So, NASA noted the advances and did pick a big parafoil for the X-38 CRV. The X-38 was a lifting body “space station lifeboat” or Crew Return Vehicle that was in development during the nineties and early noughties but was then canceled. 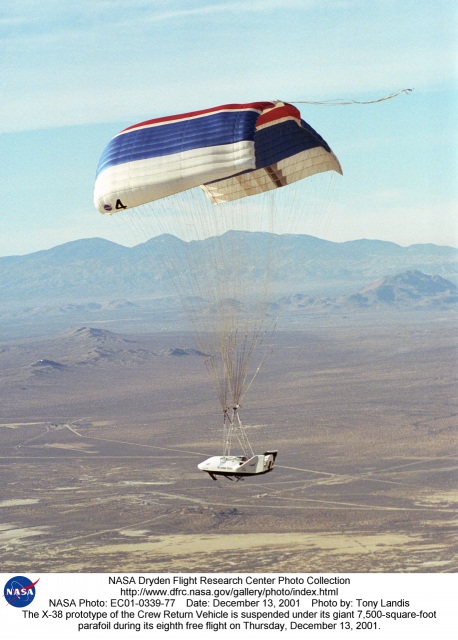 The parafoil was the biggest in history (and AFAIK, still is) with 700 square meters area. It was steerable by wire pulling. Only slightly smaller, up to 80% subscale versions of X-38 were drop tested, weighing 7 to 11 t but the craft was pretty heavy considering it was designed for six crew and was a less mass efficient lifting body. 11,000 kg for 700 square meters gives 16 kg per square meter wing loading. Compare that to the three crew roomy Apollo command module of about 6 tons mass. So the X-38 parafoil could have perhaps worked for the Orion command module with little changes.

Why didn’t NASA pick a Parafoil for Orion? At the moment the design is going with three parachutes just like Apollo. Well, one of the reasons is water landing, where you don’t need landing accuracy, flaring or speed zeroing as much. You can do pretty fine with the less refined parachutes.

And probably the biggest reason is that you can have better redundancy with three parachutes. 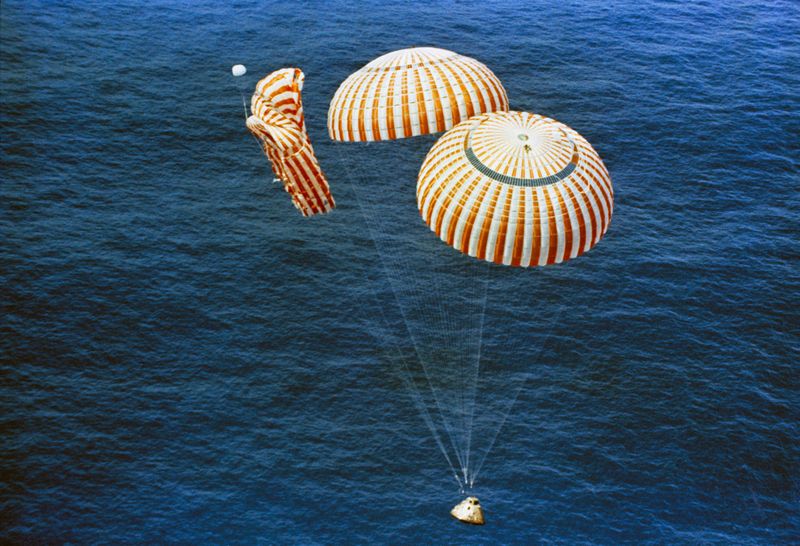 As pictured above, Apollo 15 landed quite fine with one chute not working. It would be hard if not impossible to design a system with multiple parafoils with such tolerance for failures.

Of course, the opposing question is, is such redundancy needed? Gemini had ejection seats, and in theory, if the parafoil doesn’t work, you could sever it and bail out. In a falling capsule you won’t have much time though, it might be hard to get out and ejection seats introduce their own complications and hazards merely by being included in the design, never mind their not entirely high safety factor when operating.

Flying with a parafoil is also a more complicated affair than simply falling with chutes. You need to control the foil by pulling the wires, and you need to know where you are going, especially at the late stages of landing and touchdown and you need good visibility for that, something that spacecraft are not usually very good at, with tiny windows and the crew lying on its back.

If I was asked to pick a favorite spacecraft design right now, I’d pick a parawing landing capsule. The craft could have a backup parachute, and do re-entry over water so that if the foil doesn’t work, pop up the parachute and land heavily in water. The US has ideal environment for this, as the craft can land in California or Florida, both having a good water approach. ESA could land in the US or Australia for example. Since the capsule can fly tens of kilometers on the parafoil, it is likely that a gentle runway landing can be achieved. Thus the capsule should be easily reusable.

Contrast this to spaceplanes, either lifting body or with wings, which have much bigger mass for the same payload, might have good overall down and cross range compared to the capsule because of hypersonic maneuvering but have terrible lift to drag and lift to mass compared to the parafoil, meaning a steep and fast final approach.

A capsule with a parawing should be a fraction of the mass and much easier and carefree to fly on landing. The capsule’s thermal protection system also is inherently simpler and much smaller than the big lifting vehicles which require sharp edges and complex shapes that are fragile and expensive to make and maintain.

And the rocket needed to launch the capsule would share the same mass and cost advantage – and the capsule can fly beyond Earth orbit since it doesn’t carry the vast dead mass of wings.

But I’m getting carried away, this post was about the last five kilometers only. The main point is that the parafoil is the capsule’s way out of the disadvantaged position of helpless passive falling and need for extensive recovery which has been the tradition so far. Capsules don’t have to be like that. The world has moved on since the sixties and offers wonderful opportunities. With the parafoil, capsules can fly.

9 Responses to The Last Five Kilometers