I have long been meaning to write about C&Space from Korea and it’s development of a reusable methane rocket engine. What’s different about it that it’s of decent size (100 kN, about the same as the original RL-10), it’s turbopump-fed and thus has high performance. Their engineer David Riseborough has a blog that is a nice source on what’s happening on the engine development. Methane engines are between hydrogen and kerosene in performance and trouble. 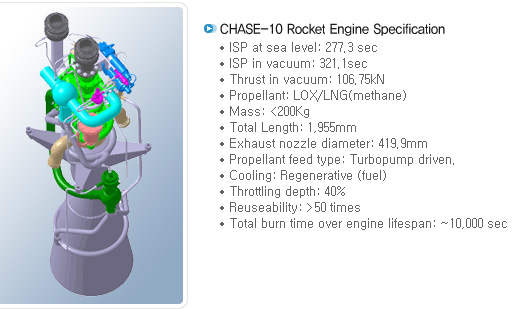 Well, then there are many small new start projects in the US: XCor, Armadillo, Masten etc etc. None of these are turbopump fed, which means they are only a first step in doing real reusable launchers of any reasonable size mass to orbit. Nevertheless they are very important.

Then there’s this interesting tidbit from Aviation Week & Space Technology about Aerojet developing a replacement for RD-180, dubbed HC Boost. But better performance and reusable. I wonder if this is related to Aerojet’s thrust augmentation idea talked about by Jon Goff earlier, where you can have good thrust from relatively low pressure high expansion rate engines at low altitude by injecting some of the propellants directly to the nozzle halfway down. This avoids flow separation. Then you can shut down thrust augmentation at a higher altitude.

It speaks a lot that Aerojet is doing this for the Air Force, not NASA. Henry Spencer has lamented how almost all US propulsion research was stopped in the sixties. There is a huge amount of ideas from that time that were suddenly just not pursued anymore. The military already had its ICBM:s and NASA had its moon rockets so the budgets were not there for research. And it’s been only directly operational designs since, which has lead to either conservativism or abortive attemps at great leaps.

The HC boost is a 100 million and ten year technology program. I still think it would be wise to try to demonstrate on a smaller scale and not try to either just keep researching or try to build a straight operational design.

I think one of the applications within the realm of near future (15 years) sensibility would be to try to build a reusable hydrocarbon first stage for a launcher. Just first have some smaller steps, otherwise you end up with a behemoth that takes months to refurbish after each flight and requires standing armies for support, is wildly unreliable and has very few abort modes so crashes with the slightest hiccup.

Thanks to Clark for the links.

2 Responses to Picking Up Reusable Engines