I’ve been long meaning to do this. There are a huge amount of propulsion concepts and terms floating around so this is my small part of trying to clear up and order this corner of the internet. Namely, high speed aircraft and rocket engines and their advantages and disadvantages in very short form. This is by no means a well researched and meticulously checked post, as I don’t have time for one right now.

This is how I’d order most of them (you can click to get a bigger picture): 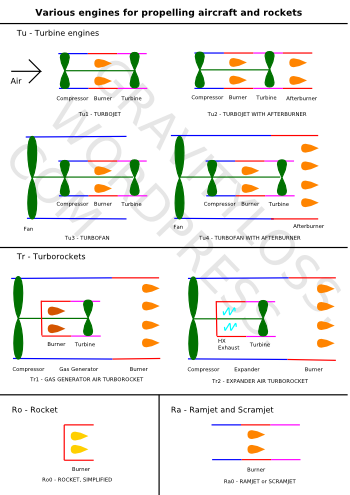 So, to explain the diagram:

They are the normal jets that airliners and fighters carry. They have a compressor, a burner and a turbine. A compressor can have many stages, and so can the turbine too. The hot exhaust from the burner turns the turbine which turns the compressor via a shaft. An afterburner adds thrust but adds fuel consumption too. A fan adds thrust with little addition of fuel consumption. Usually slow planes that need long range have turbofans and fast planes have turbojets. Well, except nowadays modern fighters have turbofans with afterburners since they have reached acceptable speeds and fuel consumption is more important.

Operating speed range is approximated from 0 to about Mach 2.5. Speed is usually limited by turbine temperature.

These are not in use anywhere that I know of. They are a cross between a rocket and a turbofan. They have been proposed for wide speed ranges. Since they don’t have a turbine in the free flow, they could in theory reach higher speeds.

In a Gas Generator Air Turbo Rocket (GG-ATR) there is both oxidizer and fuel flow from the tanks to a gas generator, that then burns them and turns a turbine which turns the compressor. This is usually the way chosen with hydrocarbon (kerosene) high speed concepts. Note that this thing needs oxidizer.

In an E-ATR the fuel circulates around the hot sides of the engine and expands to turn the turbine. Usually hydrogen is the fuel used here because of its good expander characteristics. (The RL-10 rocket engine expands hydrogen to turn its turbopumps likewise.)

The configuration in the picture is only notional. Often a compresor with tip-turbines has been proposed, this means that the gas generator exhausts along the outer rim of the compressor. The compressor is made so the tips function as a turbine for the gg exhaust, while the inner disc functions as a normal compressor. Thus you save a lot on component mass and moving parts and get rid of a possible gearbox.

In theory these could have a very wide speed range. From zero to some Mach. At the end you run into compressor problems, but it should be later than the turbine problems with turbine engines.

Example:
Marquardt SERJ proposed for X-15 follow-ons. Though this had an air breathing drive gas generator (it had tip turbine in the compressor).

Note that as far as I know, the terminology about these engines is not very well determined and this is just my interpretation from what I have read.

I’ve only shown a simplified entry in this category for comparison purposes. In reality of course rockets need “compressors” of their own kind, which are propellant pumps, and the rockets usually use gas generator, expander or staged combustion cycles to power the turbopump.

A rocket needs to carry all its oxidizer and fuel (which also are its reaction mass), which means a big craft and high thrust engines and problems, especially when cruising for a long time. But a rocket is very good for an acceleration mission: it can produce huge amounts of thrust, weigh very little and operate at any speed – and best in a vacuum.

This is also a very simplified view. A ramjet or scramjet doesn’t have any moving parts. It uses the inlet to compress the incoming air. The problem is, it can’t start while stationary. And it is inefficient at slow speeds too. They can also be quite big since the compression ratios are not very good usually. But at high mach, they are good, when the inlet can provide as much compression as a normal jet compressor.

Scramjets are a special case – they are Supersonic Combustion ramjets. The aerodynamics are hard and drag tremendous. Only a few have been demonstrated. It is usually hard to design for a wide speed range.

Ramjets have a speed range from perhaps Mach 0.5 to Mach 6, while (from memory) scramjets could be from Mach 4 to Mach 10-12. This is quite unclear.

Examples:
Ramjet: Marquardt RJ43 in Bomarc
Scramjet: X-43. The engine and airframe are a complete system.

These are not all possible engines. I’ve left out for example ejector ramjets, that are in principle rockets firing down a ramjet duct hoping to entrain air. They promise aerodynamic simplicity but have really bad efficiency. Also, many engines don’t fall clearly in one category, as they have moving parts that route the air in different places at different speeds. The SR-71’s J-58 could be considered a mix between a turbojet and a ramjet.

There are a lot of other possible concepts, feel free to mix and match components like compressors, gas generators, turbines etc etc. 🙂

In general, turbofans are efficient since they use a large reaction mass. Since power,

. Actually, propellers are even more efficient than jets at low speeds because they have even more reaction mass flow mdot and slower v_ex. But they start to run into trouble as speed is increased. There are no supersonic propeller craft. Jets and fans can use inlets to slow down the flow to subsonic inside the engine that buys them some more speed. Engines are also more efficient with higher compression ratio. But that requires more (or more advanced) compressor and turbine stages. Compressors can stall. Turbines can suffer heat damage. There are a lot of design parameters.

The Mig-25 uses huge low compression ratio turbojet engines. They are fuel hogs and have low thrust at low speed, but at high speed the inlet does quite good compression so they are better. Of course, it is quite an old design too, but it can reach Mach 3 although risking heat damage to engines. In a sense, it resembles a ramjet.

Rockets have much higher exhaust velocities (2-4 km/s) than jets but they don’t have the benefit of getting their oxygen from the ambient air or using the ambient nitrogen as reaction mass. (Edit: Removed incomplete and incorrect mathematical analysis.)

But air breathing is harder and harder at higher speeds. Drag and heating grows, it’s harder to slow down the velocity to subsonic etc… Also, air breathing, since it includes handling large volumes of ambient air, usually has big hardware mass per thrust. The compressors especially. T/m is usually about 100 m/s^2 with good military turbofans.

A lot of this stuff has been learned along the way from NASA’s technical reports as well as many links from the secret projects forum. Even Aviation Week seems to follow the experts there now. 🙂

The relevancy of this post for space access? Debatable. Many say just go with rockets – that air breathing is a nuisance. It could be so. But with so much effort spent on it, it’s still fascinating to look at the history of air breathing propulsion. And now, the near future with the upcoming Blackswift competition (if it isn’t cancelled).