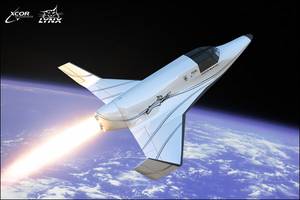 BEGIN EDIT
Oh well, there actually is more info about the vehicle outside XCOR’s press release (why didn’t they put that there?). Here, at Clark Lindsey’s Hobbyspace. Seems my speculations were a bit off-base, the dry mass was fine but the mass ratio is a lot bigger, about 3. I noticed after posting from the flight profile that the burn is quite long, 3 minutes, giving more gravity losses… So, with all this taken into account, a big part of the speculation below is wrong.
END EDIT

Well, I didn’t expect this, I thought XCOR had gotten an outside contract when they announced early this week they’d announce something on wednesday.

Interesting though, I had talked about this to a friend in February, how such vehicle would make perfect sense as a start: liquid engine with pumps to ensure very low operations cost: essentially just refuel and go again – and small size (one passenger) to enable low capital cost and easy improvability.

I was already going through Lynx in my head in the day, itching to reverse engineer the engine specs, so here goes. 🙂

Assuming an exhaust velocity of 2500 m/s, the mass ratio is

Now, there are four engines in the back, that means each is worth of 10,000 N. (That translates to about 2000 lbf for obsolete units.)

What engines does XCOR already have? Well, there’s the older “1800 lbf [8000 N] suborbital lox-kerosene engine” that was already fired in 2003. I don’t think there are any pumps hooked to it. Then there’s the most recent “1500 lbf [7000 N] rocket racing lox-kerosene engine”. That one has piston pumps, which can be coupled with ordinary low pressure wing tanks. From the video we have already seen how the Lynx wings do have tanks.

But neither page has anything about chamber pressure. What would we do with it? Well, bear with me for a second.

If we assume 30 bars or 3 MPa of pressure rise in the pump, the pump and thus the gas generator (I assume GG) fed piston engine power needed is, roughly again,

That’s only 10 kW (or about 13 hp). Piston pumps are probably a very good tool for such tiny engines. With 60 bar pressure rise the power is double, 20 kW.

What I am interested in is, where does the line lie when it’s smarter to use turbopumps instead of piston pumps? If Lynx only had one engine and 60 bar pump pressure increase, the pump power needed would be about 80 kW, which is the size of a medium car engine. Probably still fine for piston engines and pumps.

But XCOR will have its hands plenty full just flying to 62 km. The aerodynamics alone are daunting. Four engines give added complexity and will surely increase the number of aborts or partially successful flights. But they also should enable the vehicle to loose an engine at any point in flight and still avoid crashing. The most critical part of course is just after takeoff, when, if you lose an engine, you have to be able to make a goaround while the vehicle is still heavy.

XCOR has not had a habit of giving much promises (unlike many other companies such as Rocketplane Kistler or SpaceX), but rather just diligently keep working. This is the first big statement with a schedule added. This probably means that either they’ve changed (it’s already quite a long time since the whole Rotary Rocket thing), but more likely, they’ve got the funding and the technical things in pretty good shape and can actually say the timetable with a good confidence. Add to that the fact that the rocket racing plane has been making the first flights recently – their second rocket-powered aircraft project already.

XCOR are one of very few guys who I actually listen to carefully when they make schedule statements. With the Virgin Galactic hybrid problems, it will shape up an interesting future. There are a couple of dark horses too, that I might write about more some day. So much depends on funding. If you want investment advice… 😉