Worlds Within The Margin

Our solar system is only marginally stable, and also “filled to the brim” with planets. If you added another planet, the system would eject planets until it reached stability. During the disk accretion and the planetary embryo collisions, small variations determined the characteristics of the system, for example how many rocky planets would result from the chaotic process. A lot of stuff was ejected from the system into interstellar space.

So, with nature’s tendency to “fill all the slots”, expect many earth-like planets to be found in the habitable zones of stars in the future, when detection methods advance sufficiently. Currently, they only favor big planets close to small stars.

There is an excellent medium length article on this from the astrobiology magazine (found initially spacedaily’s blog) that was written in September 2007.

When looking at the history of Earth , half of the time there has been only single cell life. And only the latter half of the existence of Earth has been with an oxygen rich atmosphere. (Public domain picture from Wikipedia.) 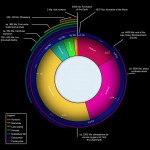 Thus the current rapid change and development phase with humans is extraordinary. It is hard to imagine what the next 100 million years will be like, as humans have only existed a few million years. Will we go extinct and will another species dig our remains and wonder why it all was destroyed? Do we have some fundamental flaws that will be our doom? Or will a random natural disaster destroy us? There are some tests of time ahead for humanity, that is certain.

And if there are lots of other Earth-like planets in this galaxy, what is their history like? As a first cut, if there are 100 billion stars in the galaxy. A large portion of them are sun-like stars and a large portion of them have earth-like planets. For example, this recent article at Centauri Dreams says how many young sun-like stars harbor warm dust at earth-distance or AU, a sign that they will develop rocky planets there later – and the older stars don’t have dust anymore, possibly indicating that the planets have formed. The rocky planet harboring number could be twenty to sixty percent of F5 to K3 spectral type stars.

So there could be thousands or even millions of civilizations on the milky way. And perhaps half of them could be millions of years older than ours.