Hypersonic Cruise for the V Prize

The Virginia Spaceport at Wallops (east coast of USA, south from New York) advocates want to create a prize to foster use for the spaceport, and have floated an idea of a “one hour to Europe” style prize, the V Prize, but the rules aren’t yet finalized.
The requirements are quite tough. About 6000 km in one hour implies a speed of over Mach 6. There’s some discussion here too.

It’s probably a useless exercise but fun nevertheless, so I propose a notional atmospheric (as opposed to purely ballistic ICBM style) vehicle design for the prize.

First of all, out of the assumed 3600 seconds available from runway start to runway stop we reserve 600 seconds for takeoff, acceleration, deceleration and landing, and 3000 s for the 6000 km cruise. This means a cruise speed of 2 km/s, at an altitude of 10 to 20 km this means Mach 6.7.

We can ditch air breathing propulsion, it’s just too hard at such speeds as you’d have to use a scramjet, which is beyond the state of the art. Ramjets top out around Mach 5-6. These air breathers would also need a separate acceleration system.

We will also use a vehicle with wings, because that helps (we will see later). We won’t look at any of the massive literature because where would be the fun in that?

Now, we can examine the cruise problem with a few huge simplifications. We assume a constant lift to drag ratio, L/D, heretofore referred to as B. Now, at level flight, the lift equals the weight and thrust equals drag. Thus

That was easy! The virtual acceleration a is just like the gravity g in a normal hovering rocket, where, with a stationary vehicle you have gravity losses

We can solve further:

Now, we can make the trajectory drop somewhat, to reduce the required delta vee. Delta vee from vertical is of course

This is simple, we accelerate to cruise velocity and altitude, delta vee is

Note that the vertical movement cancels out.

If we assume a very good lift to drag (remember this is hypersonic where the drag is a very large problem) of B=7, distance of 6E6 m distance, cruise velocity of 2E3 m/s, we get:

That kind of delta vee could perhaps be in the realm of possibility for a winged single stage. 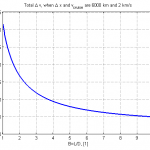 Ok, now we have some requirements. Let’s make a grand design. Take a SpaceX Falcon 1 and stick it on a delta wing platform. From the payload bay user’s guide:

Most of the Delta vee is high altitude, thus we can use a v_ex estimate of 2900 m/s. With the 6.2 km/s Delta vee, we need a mass ratio of 8.8. The 31 t of propellants, if tank size is kept original, gives a total dry mass for the vehicle of 4.0 t, leaving only 2.2 t for wings, control surfaces, cockpit and landing gear. This is clearly too little, and the Merlin could push a heavier craft easily. Also the thrust vectoring can be eliminated, shortening the rocket stage and freeing mass for adding strength for the new loads it experiences in horizontal flight. If we double the tank volume by increasing its diameter but keep a single Merlin, we have a vehicle that has
This would be a roughly MD-82-sized craft in mass, but instead of 150 people it would carry only perhaps one to three. Note that the MD-82 has only 100 kN of thrust, although it has a much better L/D.
Further dimensions can be guesstimated:

Compare this to the delta-winged Mirage 2000:

The hypersonic plane would probably need deployable low speed canards for takeoff since the center of gravity would be so far forward. The wing and control surfaces could be quite separate from the monocoque aluminum main stage, minimizing heat transfer and easing construction. The heat load would mainly be from the front and underside and thus only affect the underbelly, nose cone, wing leading edge and vertical fins, which would all have high temperature materials. The landing gear could retract in the wing – main fuselage interface space. 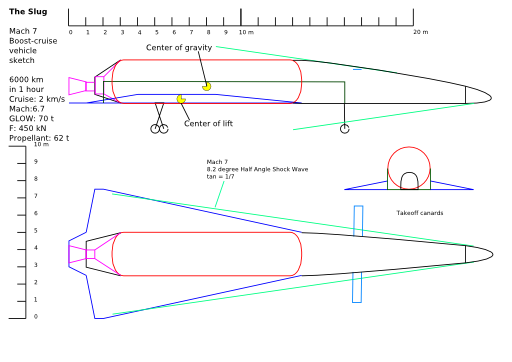 It’s weird how the thing practically designed itself to turn out pretty much like X-24C-L301, a Lockheed design for a hypersonics testbed from the seventies. The dimensions are pretty similar, but the Lockheed plane used three propellants and very many different shaped tanks.

Lastly, I included a hasty sketch, comparing the cruiser to the few relevant craft. Scale should be mostly right: 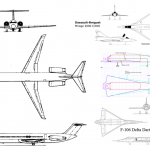 This proposal is not serious but rather overoptimistic. I didn’t research background literature at all really, but it was fun to write nevertheless. The constant L/D of 7 at various speeds and angles of attack (with heavy mass at the start of the cruise you need more lift hence higher AoA) is where it already assumes the majority of the magic to happen. For example the L/D numbers for Concorde are: Low speed- 3.94, Approach- 4.35, 250 kn, 10,000 ft- 9.27, Mach 0.94- 11.47, Mach 2.04- 7.14. So the aerodynamics over a wide speed range seems like a very big challenge. Also the variable thrust and long duration of the burn probably require at least two propulsion systems, which was completely glossed over.

There’s a lot of material available on the net to examine stuff more closely, here’s one example of hypersonic shapes. Here’s NASA’s report about the design of X-24C, a 30 ton vehicle dropped from a B-52, having a payload of 2 t and providing 70 seconds of cruise at Mach 7.

20 Responses to Hypersonic Cruise for the V Prize