Drag: Loss in Ascent, Gain in Descent, and What It Means for Scalability

Jon Goff had an analysis (no equations or numbers though!) of an air-launched reusable SSTO idea, furthermore he promised to look at other reusable orbital launch vehicle ideas in the future. I thought I’d drop a few lines in regards to almost all architectures.

The summary is that big rockets have little drag losses going up but coming down they come too fast and need some tricks.

The total negative impulse of drag during ascent is to a big order well approximated to be proportional to the frontal area of a rocket.

Drag loss as delta vee is a more ideal, but even more useful variable. It is simply the integral of drag force per mass.

Of course, mass at any point is directly proportional to takeoff mass.

So the profound result is that drag loss as delta vee is directly proportional to frontal area per liftoff mass, or in the case of a constant shape rocket, inversely proportional to rocket length l and rocket density rho.

It is NOT proportional to frontal area alone. This means that if you have a rocket that is, say, 50 m tall at takeoff, and you make an enlarged version and double it’s diameter while not changing the density, the drag loss delta vee stays the same. Drag loss grows in Joules or Newton seconds of course, but the rocket’s energy and total impulse grow as much at the same time, because the mass grows – both frontal area and thus mass are quadrupled.

What this of course means is that shorter rockets will always suffer from worse drag losses. Increasing density and decreasing the drag coefficient might help a little but probably not that much. Of course, in real life the acceleration profile and trajectory mean a lot too. Here is some data gleaned from this thread at nasaspaceflight.com and from “Space Propulsion Analysis and Design” by Ronald Humble.

The Saturn V being by far the tallest has a much lower drag loss than the rest. Though it also had the slowest acceleration in the low atmosphere.

The very first post in the whole blog derived the analytical solution for delta vee in a vertical powered landing that takes into account the drag force. The total landing delta vee is:

Meaning that the terminal velocity is inversely proportional to the square root of the length of the rocket l and the density of the almost empty rocket, rho_ter. This means that if density is held constant (a reasonable first assumption), as well as shape (similar C_d), the terminal velocity is doubled when the rocket size (length) is quadrupled. And this means more delta vee needed for landing. It doesn’t matter if the rocket is lengthened and widened or only lengthened. If the constant density is held, the increased length (or depth) just means more mass per frontal area. 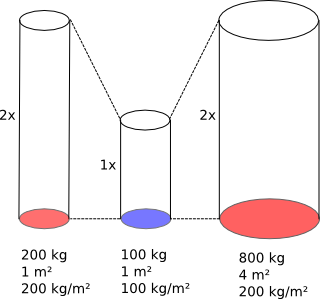 What does this mean? Well, a rocket should be tall and dense for ascent to minimize drag losses. And it should be short and fluffy to minimize powered landing requirements. Slenderness or stubbiness is not necessary, but absolute tallness is what counts here, if we assume a constant cross section.

What can be done to help? Well, obviously, the rocket can have small frontal area in ascent but deploy a speed brake when descending to lower terminal velocity. From looking at TGV rockets’ materials, they already have thought of this. But it seems to me they are the first to actually do it. It’s weird that for example Armadillo or Masten hasn’t talked about speed brakes before. They could be very simple structures. The first idea that pops to mind self-evidently is a system that has brake plates on the surface of the rocket that are hinged at the top. During ascent the airflow pushes the brake to stay closed, but during tail-first descent the airflow raises the brake plate up until it hits a builtin stop at 90 degrees. Then it’s perpendicular to the airflow and exerts a maximum drag force. Quadrupling frontal area leads to halving of terminal velocity and thus halving of landing propellant needs.

Entering at 300 m/s (transonic at sea level), the needed braking propellant mass is about 1000 kg * 390 m/s / 2500 m/s = 156 kg. If we use a drag device to quadruple the area (double frontal diameter) the terminal velocity drops to half and propellant needed to 78 kg. Thus we can estimate that the drag device can be mass-useful if it weighs less than 78 kg. On one hand, it introduces additional failure modes, but on the other, it can be deployed pretty early and reduces timing and sensor criticality a lot by decreasing the terminal velocity.

6 Responses to Drag: Loss in Ascent, Gain in Descent, and What It Means for Scalability